San Lorenzo de El Escorial is located 50 km northwest of Madrid, on the south-eastern slope of the Sierra of Guadarrama.
This area of outstanding natural beauty were chosen by Philip II to construct the Monastery of San Lorenzo de El Escorial, fulfilling his father Charles’ dream of constructing a Royal Mausoleum that, in time, would represent the spirit of his empire and the grandeur of the Hapsburgs dynasty. The existence of granite rock and pine forests in the surrounding areas provided the basic elements for the construction of such a splendid monument. The Monastery, constructed in the brief space of 20 years, boasts numerous spaces of extremely high historical, artistic and cultural value, such as the palace buildings of the Hapsburgs and the Bourbons, the library, the Basilica, the Courtyard of the Kings, the Pantheon of the Kings, where the remains of the kings and queens regnant of Spain lie, and the Gardens. The Monastery and Royal Site of San Lorenzo de El Escorial were declared a UNESCO World Heritage Site in 1984.

All these elements shaped an entire area that, although it has evolved with time, has been able to maintain the unique idiosyncrasy of its natural characteristics.

The Company Quarters were designed by Francisco de Mora, architect, and disciple and follower of Juan de Herrera, principal designer of the Monastery. The construction work was undertaken between 1590 and 1597, with the aim of housing in a single building all the warehousing, services and animals of the Hieronymite Community, the religious order entrusted with the care and maintenance of the Monastery.
The main building of the Company Quarters had a square floor plan with a square interior patio, and there was a first floor with fifteen arches per side on square columns and a second floor with large square windows over which the slate roofs were placed. On the ground floor were the mill, the ovens, the refectory with kitchen, as well as cells for guests and friars of the mendicant orders. On the upper floor were the craftsman workshops and the infirmary. In the southern row of rooms, a large doorway of a Tuscan order was opened to allow carriages and livestock to pass. To its left was a one-floor building for the smithies and coach houses.

At the end of the 19th century, the buildings were in an abandoned state. This brought about their delivery in 1892 to the Order of Saint Augustine, the new community that took care of the Monastery, in order to establish in it the Royal College of Advanced Studies of El Escorial, known today as the Real Centro Universitario María Cristina (Maria Cristina Royal University) in honour of its protector, the reigning queen Maria Cristina of Hapsburg-Lorraine. 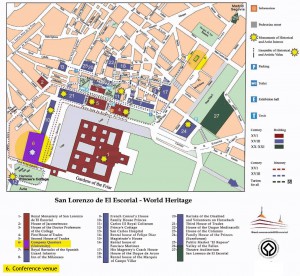 By train
From T4 terminal (*).
Journey time: 75-90 minutes, depending on connection waiting time (**).
Cost: 4,00 euro
Every hour (every 30 minutes in the central hours of the day). For the exact schedule go to

http://www.renfe.com/viajeros/cercanias/madrid/index.html and pick Origen Aeropuerto-T4, Destino El Escorial
(*) If you land in another terminal different from T4, there is a free bus to T4 (see

By underground + bus
Take the underground and go to Moncloa station. Then, follow instructions below (by bus from Madrid section)
Cost: From 4,50 to 5,00 euro, depending on the final destination (underground) + 4,20 euro (bus)
See underground map in

How to reach San Lorenzo de El Escorial From Madrid

By train
See above ‘By train from the Madrid airport’
You can take the C8 line in Chamartín, Nuevos Ministerios, Recoletos or Atocha stations. From Sol or other stations, you need to change trains.
See commuter Madrid train map in

Once you are at San Lorenzo de EL Escorial

Bus station is centrally located, with most hotels being within walking distance. The conference venue is about ten minutes walk from the bus station.
Train station is in the neighbour municipality of El Escorial
Walking distance is about 20-30 minutes, all uphill
There is a bus on the left exit of the station (indicated Monasterio – San Lorenzo de El Escorial) waiting for trains (exact schedule in

http://autocaresherranz.com/pdf/lineas/L1/ida-vuelta.pdf). Get off the bus at final stop 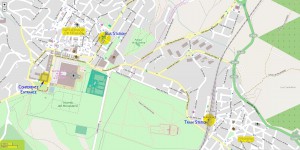